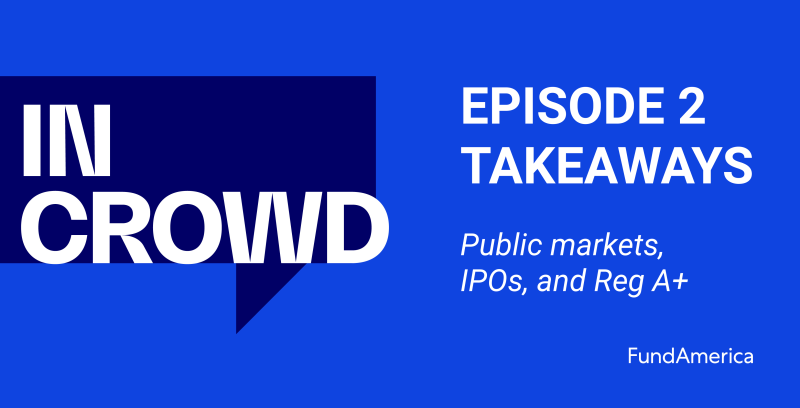 Why do companies go public and how are retail Investors becoming involved in the IPO process?

Public capital markets play an integral role in our economy and allow investors to participate in American and global growth. The process of going public through an initial public offering (IPO) is an intense and exciting experience for companies who are seeking secondary market liquidity.

But IPOs involve retail investors at the last stage, meaning they pay a premium for a company’s shares on the public market. Reg A+, a JOBS Act crowdfunding regulation, can change that by making it possible for retail investors to participate alongside institutional investors ahead of a public listing.

In the second episode of In Crowd by FundAmerica, Kinsey speaks to three experts who walk us through the history of public markets, how an IPO functions, and how Reg A+ is changing that. Listen to episode two of In Crowd now!

Publicly owned companies have unofficially been around since the Roman Empire as share companies. But the earliest documented shareholding corporation was in Toulouse, France in the 1300s, called Société des Moulins de Bazacle. The company existed until it was nationalized in 1946.

2. Stock Markets came into play with the emergence of the Dutch East India Company in 1602

The Dutch East India company was formed when the Dutch government decided to combine several private trading companies into one, intended to create a global monopoly over the spice trade.

10 years into the existence of the company, a shareholder model was developed so that average citizens could buy shares of the company and trade them at the world’s first stock exchange. The exchange was later named the Amsterdam Bourse and was the first to formally trade securities.

3. The invention of a market created liquidity, which led to more capital investment

Liquidity is how quickly and easily you can convert an asset to cash. A stock market provides this, giving people the ability to invest with the peace of mind that they could easily sell if required. This meant that people were more comfortable putting more money into the Dutch East India Company, which gave the company more capital for building ships and funding risky voyages. Today, companies go public to create liquidity.

4. In the US, the Buttonwood Tree was the founding location for the NYSE

In 1792, the Buttonwood Agreement, signed at what is Wall Street today, was the founding document for the New York Stock Exchange that brought together a set of brokers who agreed to trade together.

The early markets were focused on trading bonds, not stocks. But beginning in the 1920s, there was a feverish excitement around stock investing in the United States. This growth in stock trading is linked with the technological transformation that was happening at the time. Radio, television, airplanes and many other new and exciting technologies inspired Americans to invest.

5. After the 1929 stock market crash, the SEC was created to establish a set of rules to restore confidence in the markets

The Securities and Exchange Commission was created to change the rules for stock market investing, and for Wall Street in general. The concern of the US government was that people had lost confidence in the stock market as being a fair game. If they couldn’t trust that the operators would be playing by a fair set of rules, Americans might withdraw the capital they’d brought to the markets, which would be awful for the economy.

While the regulatory changes gave retail investors confidence in the markets that have led to some incredible bull market cycles, they have also burdened companies. If a company wants to sell shares to the public, certain types of investors are excluded from participation with the rules about how companies can share information, what they document, and what kinds of professional audits and reviews are required. However, regulation does protect vulnerable investors.

6. In the last 20 years, American stock markets have seen a significant reduction in the number of IPOs and stocks trading

Additionally, the number of stocks on the New York Stock Exchange today is about half what it was in the nineties. While it’s not clear why this has happened, it’s important to note that there is no proven “right” way to apply regulation to markets -- there are always upsides and downsides.

But as the number of companies going public declines, we must remember the social purpose of the capital markets; to fund important businesses that can make society better, and to give investment opportunities that allow them to participate in America’s growth.

7. New crowdfunding regulation is changing when retail investors can get involved in the IPO process

A new reality series called Going Public uses Regulation A+ (a crowdfunding regulation), to make that happen, creating opportunity for non-accredited investors to participate. The show, which will stream on Entrepreneur.com, will allow viewers to learn about and invest in five different companies being featured.

8. What makes a hybrid Reg A+ IPO special?

A Reg A+ offering is a public offering, but it’s the capital raising portion of the deal. Once a deal opens, both institutional and retail investors are able to buy shares at the IPO price. When the round closes, one to two days later, the company lists their shares on an exchange like Nasdaq. If they desire, investors can then sell their shares immediately.

In comparison, a typical IPO doesn’t involve retail investors until the shares are listed on the public market. This means that everyday investors pay a premium for the shares, in contrast to the listing price that institutional investors received.

Looking for more? Episode one of In Crowd explains equity crowdfunding, how it's being used, and how listeners can invest or raise capital online. Listen to the In Crowd podcast here.